This is our most recent listing of Ottawa new home and condo communities built by Charlesfort Developments.   All information was accurate at the time of collection, but we always advise readers to contact Ottawa home builders for confirmation of availability.

Are YOU a Home Builder? 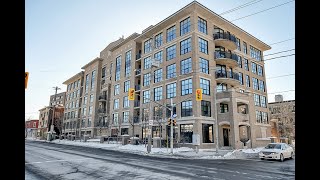 Welcome to the Glasgow. Built by Charlesfort Developments & designed by Hobin Architecture. This stunning corner unit has the "wow" factor from the moment

[Charlesfort's] Doug Casey... is thrilled about winning the city's architectural conservation awards for three of his infill projects. Glassworks, inspired by architect Charles Rennie's 1909 Glasgow School of Art, is one of the winning entries.

When he talks about three of his infill projects winning architectural conservation awards, Doug Casey sounds like a proud dad. "They're all excellent. They're all doing different things," says the excited president of Charlesfort Development, his voice getting louder and his words picking up speed as he describes the merits of each award-winning site.

"It's like having three kids. You can't pick favourites."

They're among six buildings being honoured during ... Heritage Day celebrations, as part of the annual awards recognizing excellence in the preservation of the city's architectural heritage.

"We try to build really, really good product and it's nice when the city recognizes what you're doing," says Mr. Casey, whose forte is blending new housing into some of Ottawa's oldest neighbourhoods.

His penchant for details and knack for working with existing streetscapes are what landed him this year's award of excellence in the infill category for a cluster of townhouses surrounding the former Crichton Street School near Beechwood Avenue.

"It's a very old, little neighbourhood," says Mr. Casey of the narrow streets and cottagestyle houses dotting New Edinburgh. To blend in with the mature community and complement the century-old stone school, three distinctive rows of townhouses were built: The Cottages on Avon Lane, the Gables on Crichton Street and the Annex on Dufferin Road.

"They (the townhouses) fit in really well," says the accomplished urban developer who was named builder of the year in 2000 by the Ontario New Home Warranty Program.

"They're very enchanting and romantic."

The funky two-storey lofts at the Glassworks on Main Street and stacked townhome condos at Wyndham Hall on Dufferin Road will also receive certificates of merit for infill developments.

Located on the east side of the Rideau Canal, the Glassworks consists of 10 sexy apartments featuring 17-foot ceilings and massive windows. Inspired by architect Charles Rennie's 1909 Glasgow School of Art, the exterior of the seven-storey building is clad in clay brick and accented with metalwork.

Asked to explain his successful association with Ottawa's leading architect firm, Barry J. Hobin & Associate Architects, Mr. Casey spins into another gentle rant. "It's a good collaboration. Barry Hobin has good sensibilities. I give him an idea and he runs with it."